INDIA is known for sensory-busting, rambunctious, non-stop festivals. At any time of the year, all over the country, festivals celebrating religion, the phases of the moon, culture, the seasons, India’s epic stories and who knows what else pop up with astonishing frequency. They may all celebrate different things, but they have one thing in common: they’re a spectacle to behold. These are festivals well worth visiting India to experience.

Diwali is the biggest festival in India, a celebration of the triumph of light over dark, good over evil. The word Diwali means “rows of lighted lamps” and it is also called the Festival of Light. Everyone lights small diyas and fireworks to help guide Lord Rama home from exile.Diwali is basically the equivalent of Christmas – a big, festive celebration that brings families together and is the highlight of the holiday season. There are five days of festivities, each marked with different pujas and rituals.

Holi is probably the most well-known and beloved festival in India among foreigners and many want to participate in the festivities — which involves throwing colored powder and water at each other. It’s a celebration of spring and usually takes place in March.

Durga Puja is truly one of the great festivals of India, and though not as well known as Diwali and Holi, has a lot to offer visitors. Kolkata (formerly Calcutta) in West Bengal is THE place to celebrate Durga Puja. The festival honours the goddess Durga, who represents the divine feminine energy, or shakti — the force, power and warrior aspect of the divine mother. Taking place over five days, Durga Puja’s date is tied to the phases of the moon. 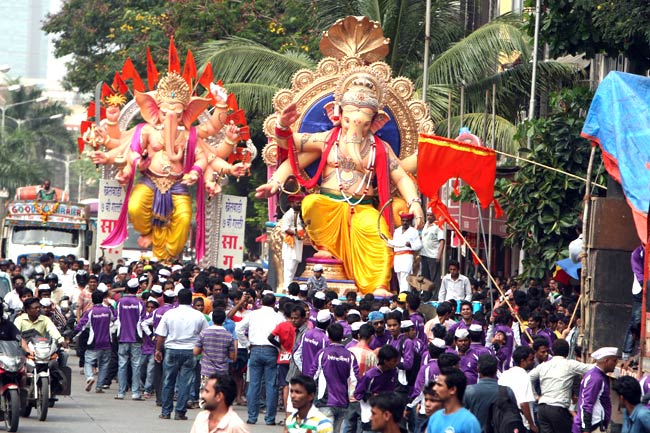 Ganesh is the beloved elephant-headed god, a favorite throughout India, and Ganesh Chaturthi is the festival that honors him. It runs for 11 days in late August or September, depending on the cycle of the moon. Similar to Durga Puja, images of Ganesh are made throughout the year and displayed during the 10-day festival. On the 11th day, called Anant Chaturdasi, the images are paraded through the streets, accompanied by singing and dancing, and finally immersed in the sea. Dussehra, also referred to as Vijayadashami, is also among the most famous festivals of India. It is celebrated in different forms countrywide. Ramlila(enactment of scenes from Ramayana) is held everywhere for 10 days. It’s culminated with “Ravan Dahan” – the burning of huge effigies of Ravana, Meghnath and kumbhakaran which is a real spectacle to see. Navratri festival is celebrated by all people throughout India in different ways. In Gujarat, it is a nine day celebration of rejuvenating Garba nights and highly energetic Dandiya Raas dances. People are dressed in beautiful, colorful traditional clothes and the environment is very youthful and invigorating.

Janmashtami is again a beautiful one among the most important religious festivals of India. Janmashtami celebrations in Mathura and Vrindavan are very popular. People fast throughout the day and break it with a special meal after dusk. Visiting temples, praying, dancing, and singing bhajans (hymns) at midnight is a part of the celebrations of the birth of Lord Krishna. Often, small children dress up like Lord Krishna on this day. Images and picturization of Krishna’s life story are depicted in the “jhaankis” in temples.

Dating a girl! Here are 7 secrets that your Girlfriend never told you

Are you on the verge of starting a lovey-dovey relationship with your girl? Well, if this is your first time,…

5 Unique Bachelorette party Ideas for your Best Friend in 2017.

It’s no secret that how difficult it is to date a girl in India. Why is it so? Don’t girls…

Here Are 7 Habits of Millionaires That You Never Knew About!

We most often question ourselves, what does it take to become rich and be among the top millionaires of the…

10 Everyday Use Items That Are Dirtier Than Your Toilet Seat!!

We always think of our toilets as being serious in terms of cleanliness, even though we clean them regularly and are…